The Importance of Digital Health for NCDs at WHA

The recent 71st World Health Assembly was exciting for digital health champions like me!

First and foremost, the awaited and hoped-for Digital Health Resolution was approved urging Member States to prioritize the development and greater use of digital technologies in health as a means of promoting Universal Health Coverage and advancing the Sustainable Development Goals. The resolution was proposed by Algeria, Australia, Brazil, Estonia, Ethiopia, Germany, India, Indonesia, Israel, Italy, Luxembourg, Mauritius, Morocco, Panama, Philippines and South Africa. This move is significant and will hopefully mark another inflection point in the development of digital health. India deserves special congratulations for having supported this initiative over the months.

I was also thrilled at the high-attendance and success of the event I supported the NCD Alliance, the Novartis Foundation and Intel in organizing which focused on the importance of digital health for addressing the challenge of NCDs. Although there were already many events on NCDs at WHA last year, we had noted little mention was made of the significant potential digital health and technology could play in this space. Several players decided to act on this gap by raising awareness to the eco-system. This has spurred one of this year’s digital health working group from the Broadband Commission (co-chaired by the Novartis Foundation and Intel) to work on a global report which should be released in September around the UN High-Level Summit on NCDs in NY.  Below is a snapshot of its content and its 36 working group members. 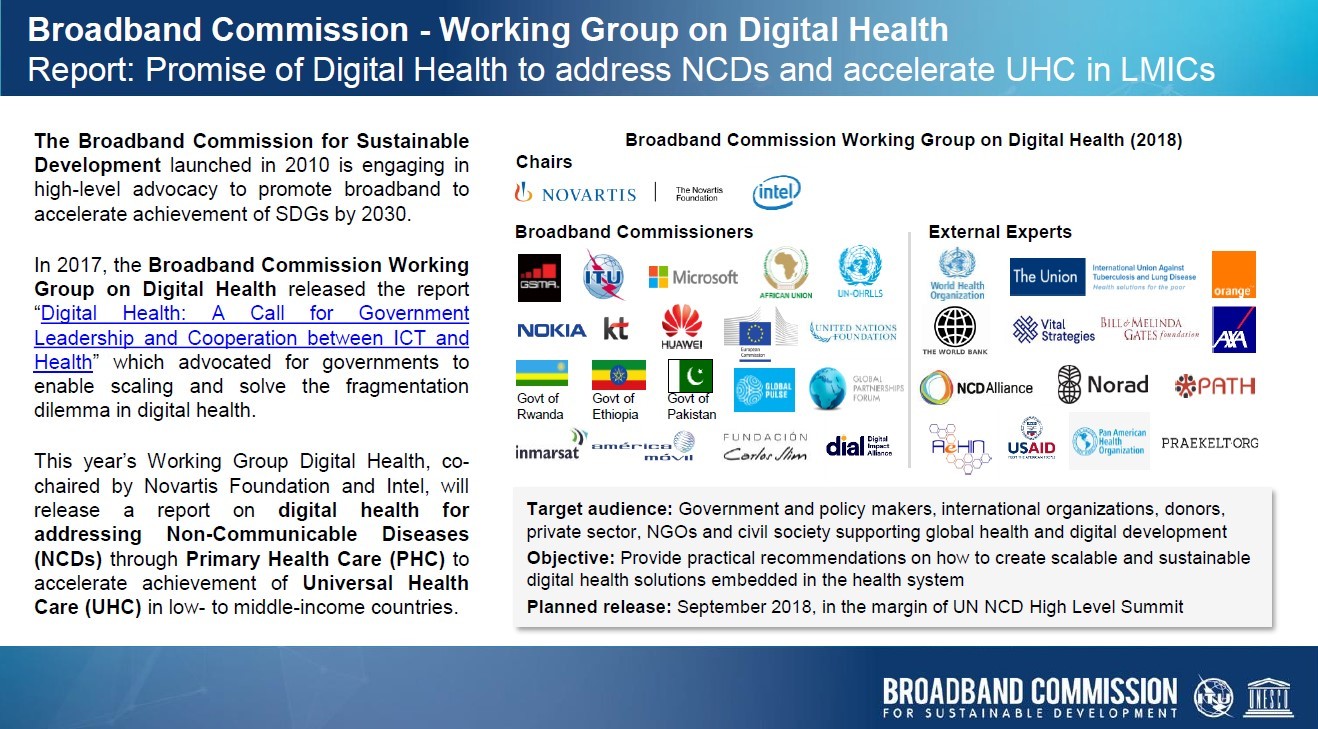 The event at WHA served in some ways as a prelude to this report and aimed to start raising awareness on this important subject. Health ministers and experts from Ghana, Rwanda and India discussed how governments and policies can make a difference in using the tool of digital health for NCDs and thereby improving UHC. WHO presented the important joint WHO-ITU “Be He@lthy Be Mobile“ initiative which has already achieved quite a bit assisting 9 countries to develop programs using mobile health targeting NCDs. The George Institute for Global Health, Siemens Healthineers, the NCD Alliance, the Novartis Foundation and Intel brought their insights on the importance of partnerships. The Carlos Slim Foundation spoke of their significant CASALUD NCD project which uses digital health and has reached to over 12 000 health centres in Mexico and touched over 1,5 million patients.

The event was a great reminder on how powerful the tool of digital health can be in revolutionizing how NCDs care can be delivered by expanding access, improving efficiency and training less skilled health workers. Of significant importance is the empowerment of patients managing their own disease which is created by connected devices, apps and digital solutions at large. Thanks a million to the NCD Alliance, Intel and the Novartis Foundation for the great team work. Stay tuned for the upcoming report from the digital health working group from the Broadband Commission!

Special congratulations also to the Commonwealth Centre for Digital Health for its recent launch and the wonderful event they also held at WHA. Several ministers of health were present, and the expertise shown in their speeches gave a glimpse of how the cycle of digital health is maturing and becoming more widespread in high-level political circles.

Here is also a good read from Ann Aerts, Head of the Novartis Foundation on WHA and digital health: Reflections on a great week at WHA71 as the World Health Assembly acknowledges digital health to fight NCDs and accelerate universal health coverage.

Just hot from the press : a new report to accelerate digital health